Learning objective: After reading this article, learners will be able to cite a new clinical development in essential thrombocythemia.

The incidence of cytogenetic abnormalities in essential thrombocythemia (ET) is low at <10%, and the prognostic relevance of these abnormalities remains poorly understood. The traditional survival assessment is based on the International Prognostic Score for ET (IPSET-survival) and Mutation-Enhanced International Prognostic Scoring System for ET (MIPSS-ET) which include U2AF1, SF3B1, and TP53 mutations, while polycythemia vera (PV) and primary myelofibrosis (PMF) prognostication take into account abnormal karyotypes.1

Naseema Gangat and colleagues conducted a retrospective study1 to outline the prevalence and spectrum of cytogenetic abnormalities, identify the clinical and molecular correlations of abnormal karyotypes compared to normal karyotypes, and determine the implications of abnormalities for disease evolution and survival in context of existing prognostic models. The results were published in the Blood Cancer Journal,1 and we are pleased to summarize the findings below.

A total of 809 patients were recruited from the clinical myeloproliferative neoplasm database at the Mayo Clinic, Rochester, US:

The results of the assessment of cytogenetic karyotypes are shown in Figure 1.

Figure 1. Distribution of A genetic karyotypes among total patients (N = 809), and B abnormalities present in patients with abnormal karyotype excluding Y chromosome (n = 16)*

The most frequent sole genetic abnormalities identified are shown in Figure 2. Table 1. Clinical and laboratory characteristics of patients with normal vs abnormal karyotype*

The presence of del(20q) alone depicted a male majority at 75% vs 33%, and a higher incidence of prior arterial events at 38% vs 13% which was accounted for by male gender.

A total of 596 patients from the cohort were annotated for driver mutations and their association to each karyotype (Figure 3).

Figure 3. Driver mutations for each karyotype*

The prognostic impact on overall survival of the abnormal karyotype other than the loss of Y chromosome remained significant in the presence of SF3B1, SRSF2, U2AF1, and TP53 mutations (p = 0.04).

The presence of the abnormal karyotype was shown to reduce overall survival, as well as magnifying the risk of fibrotic and leukemic progression. Moreover, the abnormal and loss of Y karyotypes were found to be associated with inferior survival. The study,1 the first of its kind, as well as including the largest cohort of patients so far, shows value in making use of cytogenetic studies as part of a standard diagnostic workup for patients with ET. Furthermore, for the first time, it demonstrates the impact of an abnormal karyotype other than the Y chromosome on overall survival. It however remains to be determined if the DNA-damaging effects of cytoreductive therapies in conjunction with abnormal karyotypes and/or additive somatic mutations may be enhanced.

COVID-19 has been reported to damage multiple organ systems, primarily the respiratory system, which contributes to the high mortality rate among patients. In...

COVID-19 has been reported to damage multiple organ systems, primarily the respiratory system, which...

In a recent publication in the American Journal of Hematology, Tefferi and Barbui provided a review of the 2021 updates on the diagnosis, risk‐stratification, and management of...

In a recent publication in the American Journal of Hematology, Tefferi and Barbui provided a review of the 2021 updates on the diagnosis,... 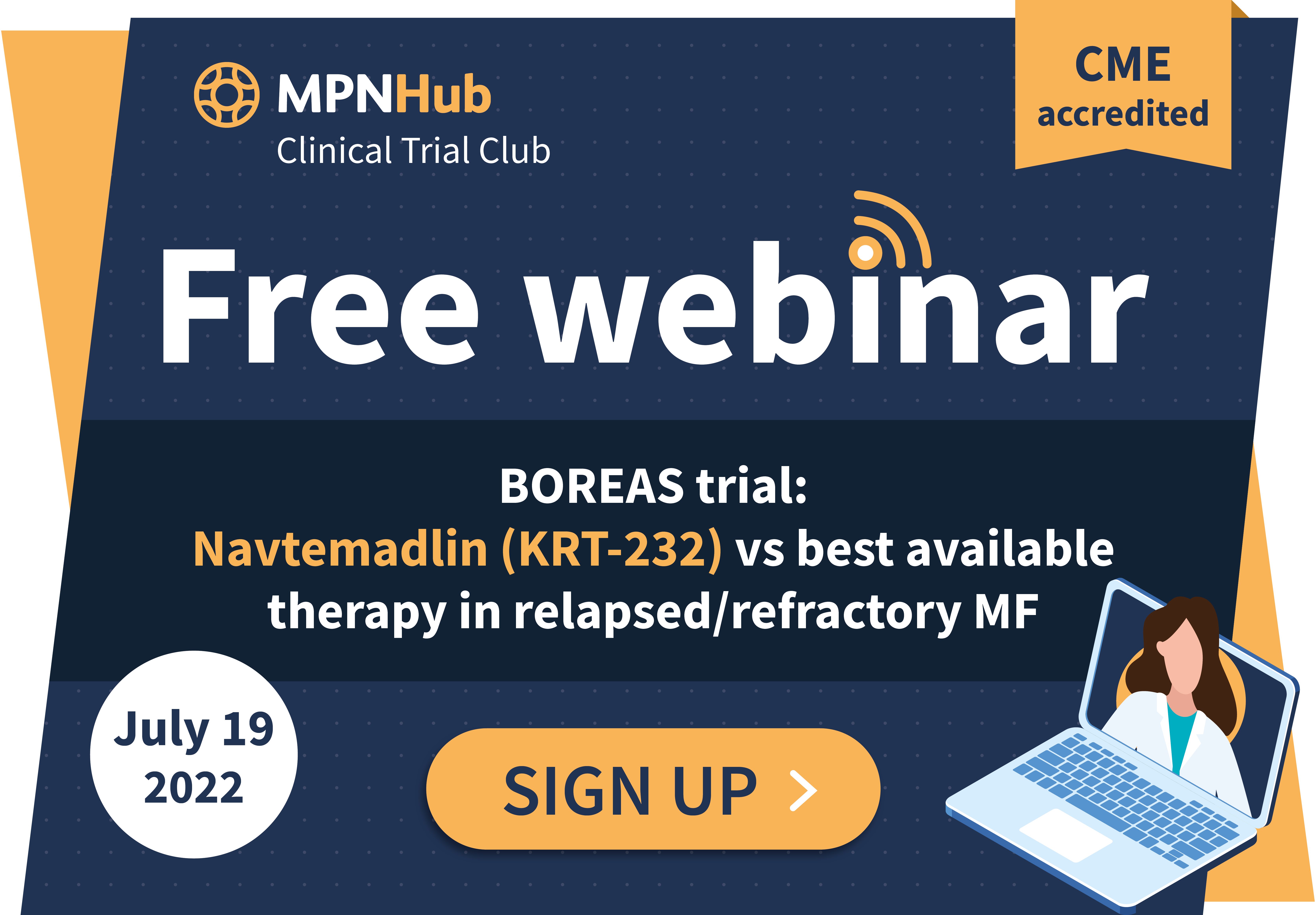 This independent educational activity is supported by Kartos Therapeutics. All content is developed independently by the faculty. The funders are allowed no influence on the content of this activity.